This research project became one of the first and only studies that made a credible research –based connection between the work of the school board and levels of student achievement. It has been referenced countless times as people try to identify the characteristics of good board leadership.

The results show that school boards in districts with high student achievement:

The goal of phase 2 was to determine ways in which boards influence conditions for success in improving student achievement district wide. They chose five pilot districts in Iowa to do follow-up research.

The findings supported the original concepts and helped identify criteria by which boards could be measured regarding their influence on improving learning in a district. The work with the pilot districts helped reinforce the notion that boards of education can positively impact student achievement when the condition are met, but that boards can also negatively impact learning when they do not.

A decision was made to develop a training program that would help boards reach this higher level of effectiveness.

The next phase was the development and implementation of tools to help boards achieve the indicators that make districts successful. The consortium identified conditions that are supported by research, which are necessary to bring a district to a higher level. Those conditions are:

The belief structure of the board and the district also have a significant effect on student achievement. In fact the evidence was dramatic just how much attitudes and beliefs drove success in school districts. In systems where the expectations were low, the results were correspondingly low.

The team started a five-year study of best practices of board-superintendent teams for improving student learning. The states involved were: California, Colorado, Illinois, Iowa, Kentucky, Missouri, Oregon, Wisconsin, and NSBA. The consortium then started developing tools and workshops to build a district’s capacity to reach these higher-level conditions.

The findings of the research showed that school boards in districts with a history of higher student achievement were significantly different in knowledge, beliefs and actions from boards in lower achieving districts. 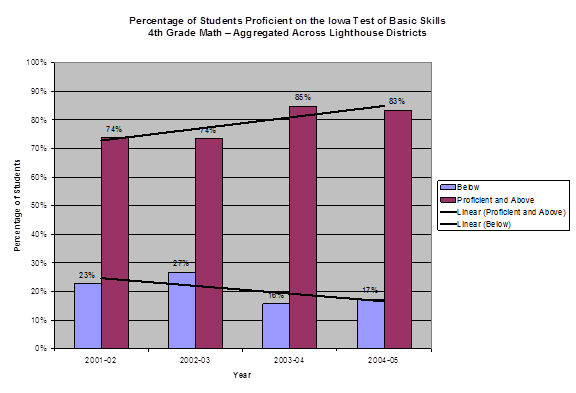 The training boards receive was developed by a this multi-state consortium and builds upon the findings of the Iowa Lighthouse research and identifies the ways in which local school boards influence the conditions for success that are necessary to improve student achievement. The training is designed to facilitate the board’s learning the role that only the board can play in promoting high achievement for all students within the district. In the study, it was found that building a strong working relationship between the board and its superintendent is integral to the success of the district. Boards and superintendents must rely upon positive trusting relationships to enable them to play effective, interdependent leadership roles, to examine and challenge each others' views, to study data and confront existing realities, to ask probing questions, and to scrutinize each other’s performance in ways that strengthens and mobilizes the entire leadership team. During the training, the scope of these issues are developed and incorporated into the work of the board through hands on group activities and discussion.

While each state has stayed true to the research base supporting the work, states have gone about the training in a variety of ways. Opportunities for these states to share ideas and results have made the entire program stronger.

The training generally consists of two or three-hour sessions (typically once a month). The foundational learning can usually be accomplished over the period of a year with some training embedded within regular Board of Education meetings after year one.

Prior to beginning the training, all members of the board, all administrators, and all teachers participate in an on-line survey that provides a baseline as to where the beliefs and conditions for success are perceived to be prior to the training. We repeat the survey in subsequent years to measure growth in these areas and match that growth with anticipated improved student achievement.

The training is set up by modules, including:

Other sessions as needed.

If you are interested in participating in Lighthouse training, please contact Nick Caruso, Senior Staff Associate for Field Service and Coordinator of Technology (ncaruso@cabe.org)