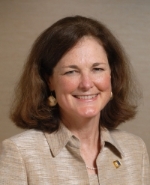 Mary Broderick, Ed.D. is a known and respected educational leader, presenter, and facilitator. Mary comes to CABE executive searches with deep experience in board leadership.

A past president of the Connecticut Association of Boards of Education, Mary served as a committee member on the Connecticut State Department of Education on Universal Pre-kindergarten, working with the Governorand regional offices on preschool educaiton and the achievement gap.  She also served as a member of her congress member’s Education Roundtable.  In addition, Mary represented the state association on a state-wide committee on teacher recruitment and retention, as well as the Connecticut Department of Education and Mental Health Task Force.   From 1994-1999, she co-chaired a regional forum on the issue of quality and diversity in education.  She also served as president of LEARN, her regional educational service center.

Mary has presented at a number of national conferences and workshops and has authored numerous articles in national publications, including on leadership and educational quality and diversity.

The mother of two grown children, Mary lives in East Lyme.  In addition to supporting local and regional boards of education in executive searches and board development, Mary works with a number of communities on efforts to improve odds of early school success as an educational consultant with the William Caspar Graustein Memorial Fund and she fosters dialogue about educational issues as a consultant with Community Conversations.  Mary has a Bachelor’s degree in English from Skidmore College, a Master’s in Business Administration from the University of Toronto, and a Doctorate in Educational Leadership from the University of Connecticut.

Dr. Paul C. Gagliarducci began his successful career in education beginning as an elementary school teacher and retired after 39 years; the last 22 years as a school superintendent. Teaching experiences at the elementary and middle school level, administrative work as a vice principal, principal, an assistant superintendent, and superintendent highlight Paul’s career. He has worked in rural, suburban, and regional districts in both Massachusetts and Connecticut. He is a graduate of Fitchburg State University. He holds advanced graduate degrees from Springfield College and received his doctorate from the University of Massachusetts.

Throughout his career and during retirement, he is active in state and regional associations holding several leadership positions. Dr. Gagliarducci has also presented at numerous conferences. He has assisted regional school districts in Massachusetts with their plans to expand their district size, helped to develop strategic plans, and prepared documents for new school construction projects. He currently serves as the part-time superintendent in Bozrah, CT.

Paul believes in the adage, “pay it forward”. To do so he has also worked with American International College in Springfield, Massachusetts as an adjunct professor and a mentor for aspiring administrators.

He brings to the CABE Executive Search Services the belief that superintendents can make a difference and that helping Boards of Education find the “right” leadership helps to make learning a positive experience for the children in their community. Of proud note, he is thrilled that two of his children have become educators working in Connecticut districts.

Jackie Jacoby began her career in education as a classroom teacher and quickly moved to a variety of both line and staff positions in public and private education.  She completed her doctorate at and served as both an energetic and creative suburban superintendent in for a period of 11 years. This was followed serving as the interim urban Superintendent of Hartford CT, the third poorest city in the . Along the way she served as Chair/Professor of Education at a private university in and taught leadership courses at the .

Jackie, a successful professional devoted to public education brings a talent for the search process from her extensive and successful track record as a life long leader in education.  She is a champion of selecting talent and has promoted a program of recruitment and retention in the districts where she has been an educational leader.  Evidence of success is the team of administrators selected by the board of education in a suburban community, all of whom were hired and coached by Dr. Jacoby.  She has continued in this effort by mentoring for over five years with superintendents new to their positions.

Jackie has a wide range of interests and is deeply involved in public service as she serves on a variety of boards including the Advisory Board for , Choir School in and CT Audubon.

She has held many leadership positions in professional organizations, and received numerous awards including the Presidential Award from the Connecticut Association of Public School Superintendents and the Professional Woman of the Year from .  Unique is her legacy to the community whereby the Chamber of Commerce founded an educational foundation begun in her honor upon retirement.

Jackie is a professional who makes a difference and her recruitment of future leaders in as a member of the CABE team will enrich the process for Boards and their communities.

Our Mission - To assist local and regional boards of education in providing high quality public education for all Connecticut children through effective leadership.